Today is the penultimate day, and I’ve been doing the ‘chores’ that need doing before departure. Yesterday I took the bike for a ride around Kochi and did a bit of sightseeing.I wanted to make sure the bike started OK and it did and also wanted to do some sightseeing. I’d done some research and decided to visit the Museum of Kerala Arts & History  ( www.keralamuseum.com ). I carefully worked out a route and set off. Before long I was back at the flyover where the Police re-routed me yesterday, but this time going the other way. You guessed it, I was waved away again. Like yesterday I got lost trying to find my way through the back streets and eventually gave up on the idea and decided to follow plan ‘B’ instead. That was to ride over across the bridges to Bolghatty, Vallapadam and Gundu islands.

My navigational skills seemed to be up to this and I managed the trip without any major blunders! As I was going over the bridge to Vallapadam Island it started to rain so I took shelter under an underpass, along with several other motorcyclists. I got chatting to one, William (I assume that was an anglicised version of his name!) who, like so many other Indians I’d met, was keen to hear where I was from and where I’d been in India. I even got to the point of showing him the Google Earth views of my house in England before the rain gave over and we went our separate ways.

At one point in my ride I went through an area that was absolutely full of people just milling around and being watched by a significant number of Police officers. I guess it was some kind of demonstration, but I’ve no idea what it was about. Further down the road I came upon a Christian church where there was obviously a service under way. I’m sure many churches in the UK would envy the numbers of people in attendance (see the pic below).

I spent the afternoon relaxing, dozing and having a room service dinner as by the time I got back to the hotel I was feeling tired after my busy month in India!

As I said in the introduction today has been about tying up loose ends. I’ve packed one suitcase full of the souvenirs and presents I’ve bought whilst I’ve been here. I only came with one suitcase, but bought so much stuff whilst here I had to buy another suitcase! Fortunately my baggage allowance is for two bags! I’ve also been and had another x-ray of my sinuses and taken it to the Doctor for my last check up in India. He says that they’re healing well, but I should visit my own Doctor in the UK as it’s too early to give a definitive prognosis at this stage. When I went to pay after the appoint ment I was surprised to be told that there was nothing to pay as it was all part of the same consultation. Given that I’d only paid him Inr 200 (£2.20 / $3.40) and I’d actually seem him four times I think that’s amazing value!

Back at the hotel I started thinking about the bike and wondering if it would start later when I needed to take it back so decided to go down and check. It’s a good thing I did as the battery was flat again and the electric starter wouldn’t turn the engine over. I managed to get it started with the kick-start this time though. Once it started I took it for a ride to put some charge in the battery for later and called in on IPSR to say goodbye to the people there. I Had a long chat with Mohsin, my instructor, and was aslo shown my picture on the ‘wall of fame’ in the foyer.

Back at the hotel I had lunch in the bar and then in my room mapped my journey to Boothlapuram (just the direct route at 313 Kms / 195 miles – I’m not too sure where I was, or how many extra miles I travelled when I took the wrong turnings!). Later there was a knock on my room door and I was presented with a complimentary bottle of wine by the management of ‘The International Hotel’ ( http://www.theinternationalhotel.com/ ). A really nice gesture I thought.

Shortly Kichu  will be here to accompany me to drop off the bike and then give me a lift back to the hotel.

I can’t believe I’ve been here a month already! Where has the time gone? 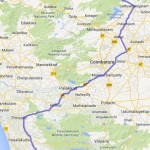 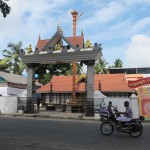 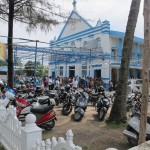 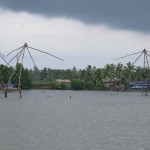 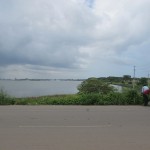 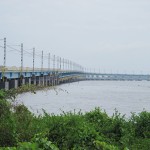 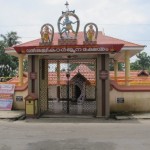 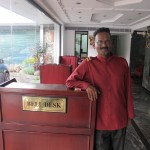 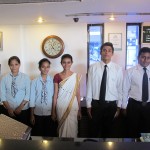 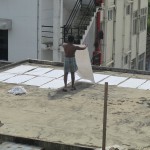