I’m now back home after my trip to India. I’ve unpacked and done the washing (just as well since the washing machine broke yesterday, just after I finished!). The journey back was long, tiring an painful. The first, three hour, internal flight to Delhi was fine and I even managed to doze for an hour or so (something I rarely do on an aircraft!). Then I had a six hour layover in Delhi airport which mas plain boring. After arriving from Kochi we needed to go through (another) security check. When putting all of my metal belongings into a plastic tray prior to going through the metal detector portal I was given a tag with the tray number on it so that the staff would know that it was my belongings in the tray when I collected it. Unfortunately the tag they gave out was made of metal! Every passenger set off the alarm and had to then undergo a manual frisk down. Not too surprising when they give you a metal tag to take through a metal detector!

It was the nine hour Delhi to London flight that was painful. When I checked in I’d asked for an aisle seat on both legs of the journey and the lady kindly offered to give me an aisle seat by an emergency exit (you get a bit of extra legroom). When I got to Delhi I looked properly at my boarding pass for the second flight and found I was in seat A11. an seat with the letter ‘A’ designation is always a window seat. My thoughts about the check in lady were less than charitable, but there wasn’t really anything I could do about it at that point. When I got on the lane I found it was indeed a window seat  but the one immediately behind the entrance door to the ‘plane, so I had about ten feet of legroom! I mentally apologised to the check in lady!

Although I had plenty of leg room I couldn’t get comfortable in the sat, and whatever I tried I couldn’t avoid sitting in a way that exacerbated my painful back. In the end I spent about a third of the flight stood up, as that was less painful. At least my seating position gave me the space and opportunity to do so, thanks to the kind check in lady in Kochi.

Being so near the door meant I was the first off the ‘plane after the first class passengers and I was also lucky that my bags were one of the first to be unloaded. The taxi was waiting for me on arrival and I was soon home. By this time I’d been awake for for around thirty two hours (apart from the short doze between Kochi and Delhi) and was feeling as though I was on another planet! I was fine by the next day though.

So, now I’ve been home for a few days, what are my thoughts about my trip?

There is a dichotomy about India. There is much poverty and the infrastructure needs modernising. There is a greater reliance on manual work than in the west. Pay rates are poor, but prices are low when compared to western prices. Despite this the people seem much happier in general that those in the west and they are in many ways much more ‘human’. By that I mean that they have a much greater empathy for their fellow citizens (and visitors!) and are much more ready to help and are more open than we would find in the west. The people of India are much more spiritual that those in the west and religion plays a much larger part in their lives than it does for people here in the UK.

Whilst they people are endearing, they are certainly certifiable maniacs when they get in or on a motor vehicle! I have deliberately played down the dangers of driving or riding on Indian roads so that my friends and family would not become too worried about me. Now I’m home safe I can tell it ‘like it is’. There is no concept of the ‘right’ or ‘wrong’ side of the road, only the concept of where the driver wishes to be. The bigger the vehicle, the more ‘right’ thay believe they have to be wherever they choose. This applies to dual carriageways as well. It is common to meet vehicle going the ‘wrong’ way on a dual carriageway. Where the road is bad and full of potholes drivers pick their path around the potholes regardless of oncoming traffic and it is common for vehicle to pass each other on the ‘wrong’ side. Traffic joining a main road from a side road just pulls out without looking, expecting the oncoming traffic to stop for them. The worst offenders at this are the autos (tuk tuks).  They are also fond of ‘filtering’ (called ‘splitting lanes’ in the US), this is normal for  motorcycles in the UK, but illegal in most states of America and also in France. In Kochi autos and cars would force their way between lanes of parked cars with only inches on wither side. They also drive within inches of the rear of the vehicle in front. The only saving grace about driving in India is that average speeds are generally quite low, giving drivers chance to brake or take avoiding action as necessary.

Motorcyclists in India are required to wear a crash helmet but many do not and no passenger wears a helmet as that is not required. Many riders use a builders hard hat as a helmet, though I can’t imagine one staying on in the event of an accident. No rider wears protective clothing, the usual riding garb for men being a pair of flip flops, a pair of shorts and  a T-Shirt. Women usually wear saris and sit side saddle. It is not uncommon to see a whole family on a motorcycle; up to four or five people crammed onto a small commuter bike. Weather protection (if any) is usually a plastic mac worn back to front (so the rain doesn’t force its way through the button front) or an umbrella (yes an umbrella on a moving motorcycle!). I also saw many people using mobile phones, both for voice calls and texting, whilst riding a motorcycle! All in all I believe India to be one of the most dangerous places to ride a motorcycle anywhere in the world! That said I am sitting here writing about it, so it can’t be all that bad!

Would I recommend a visit to India? A resounding YES! I will certainly be back. 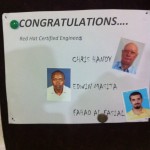 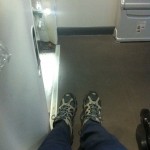