Well I was truthful about my plans for today – I went on a river trip and visited an art gallery, as well as visiting the Cathedral.

The Cathedral visit was as much prompted by the weather as a desire to see the inside of the Cathedral. That said the outside is magnificent (even if it does need a clean!) so I was intrigued to see inside. I was not disappointed; the inside is just as magnificent as the outside (and much cleaner). The stained glass windows are some of the best I’ve seen (and I’ve now visited a good many medieval Cathedrals in Europe). Unsurprisingly, given the weather, it was full of people admiring the exquisite workmanship on display. Though it attracts around 20,000 people a day, making it Germany’s most visited landmark, even in good weather. It is also the largest Gothic church in Northern Europe, has the second-tallest spires and the largest façade of any church in the world. All that right outside my hotel door!

After visiting the Cathedral I took a walk over the rail bridge, There is a footpath alongside the rails with a metal fence to keep pedestrians off the tracks and away from danger. Lovers lock padlocks to the links of the fence to symbolise their ‘unbreakable’ love. There are literally thousands locked to the fence with an estimated weight of over two tonnes!

I took a round trip on the river which was a very pleasant way of spending an hour and seeing the city from an unusual viewpoint. I soon realised that there are next to no skyscrapers in Cologne, which is very unusual for a city of this size and this is because skyscrapers are banned in the vicinity of the Cathedral so as not to overshadow its magnificent spires.

By the time the boat trip was over I was ready for lunch and headed over to “Gaffel am Dom” (http://www.gaffelamdom.de) which is a brewhouse, pub and restaurant all in one. After an inauspicious start where the waiter forgot I was there and left me waiting for nearly half an hour things started to improve, helped by the free beer the waiter gave me to make up for the wait. I’d intended to just have a snack but I then saw that they had blutwurst on the menu. I’ve long wished to compare German blutwurst with its British equivalent of black pudding so had to sample this traditional German dish. Cologne has a local speciality featuring blutwurst: ‘Himmel und Erde’ (Heaven and Earth) combines apple sauce, mashed potatoes and Blutwurst served hot on one plate. Once ordered waiting was a thing of then past and my food arrived in just a few minutes. The blutwurst had a ‘softer’ consistency than black pudding due, no doubt, to the lack of cereal and fat chunks prevalent in black pudding but was delightful none the less.

Once fed and watered I felt it was time for a little culture and went to the Museum Ludwig where there was a retrospective exhibition by the artist Sigmar Polke (http://www.museum-ludwig.de/en/exhibitions/sigmar-polke.html). In addition the museum featured works by Andy Warhol, Rene Magritte, Salvador Dali and an extensive collection of Pablo Picasso works. I’ve had the good fortune to be able to view other Dali works in the past and I find them all quite stunning ‘in the flesh’. Photographs of them really do them no justice so it was a delightful surprise to find ‘La gare de Perpignan’ hanging in the Museum Ludwig. Another unexpected pleasant surprise were original photographs by Man Ray and Henri Cartier Bresson. All told the visit was a highlight of my time in Cologne and well worth the €14 admission charge (I believe the charge was only for the Sigmar Polke retrospective, so represented even better value).

By the time I’d completed my tour of the Museum Ludwig my arthritic hips and tendinitis were making themselves felt so I retired to my hotel to rest my afflicted limbs and consider my dinner options. My first thought was to return to the Gaffel am Dom and sample their pork knuckle (which I’d seen at lunchtime), however when I got there it was bursting at the seams with people qued out of the door for tables. I therefore went looking for an alternative and found the “Frueh am Dom” (http://www.frueh-am-dom.de/). This too was busy but I managed to get a table share with a young German couple. Strangers sharing tables seems commonplace here – I shared my table at the Gaffel am Dom with a couple of ladies who arrived shortly after I did and was asked if I could take a pictures of them with their phones. At the Frueh am Dom I elected to have the “Eisbein mit sauerkraut”. This is a boiled pork knuckle with mash and saurkraut and is a real classic. The sharpness of the saurkraut perfectly offsetting the pork. In a previous visit to Germany I’d had roasted pork knuckle and really enjoyed it so was keen to try it cooked in a slightly different way. On balance I think I prefer the roast version but either are excellent.

Full to brimming I’m now back in my hotel listening to Marianne Faithfull and am planning to head for Lille in France tomorrow (though reserve the right to change my plans at any time between now and arrival!). 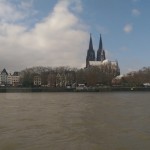 A view of the Cathedral 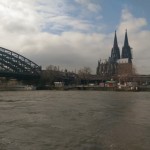 The Cathedral from the river 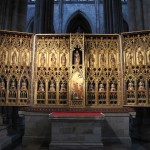 Fine guilding in the Cathedral 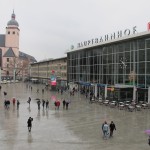 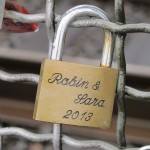 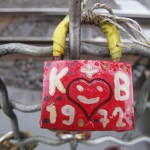 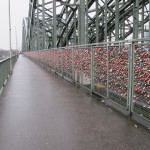 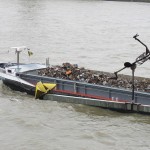 Metal sculpture on a lamp bracket above the river 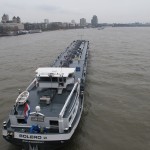 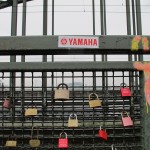 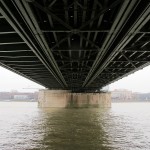 The underside of the rail bridge over the Rhine 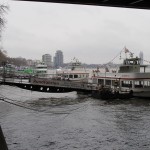 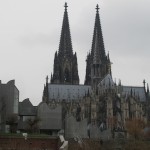 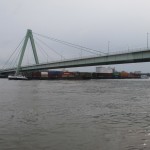 Severin Bridge with barge passing underneath 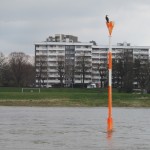 Any perch above a river! 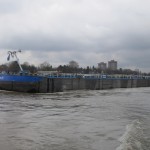 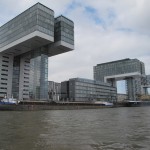 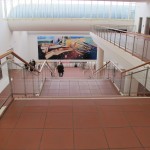 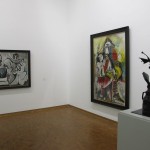 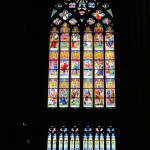 One of many superb stained glass windows 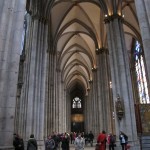 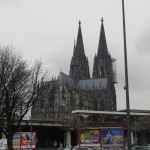 Cologne Cathedral from the riverbank. 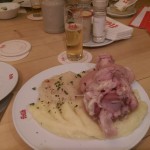 2 thoughts on “Cologne from the River”