Today was stage one of the journey home. Whilst there is plenty more to see in Cologne my ‘itchy’ feet (or should that be wheels?) were making themselves felt so it was time to move on. If Time had been more plentiful I would have headed further afield (Switzerland, Poland, Hungary . . . all places I’d like to go) but with time limited finding somewhere vaguely in the direction of home seemed to make sense. My colleague (and long standing friend) Loz had suggested Lille to me as a nice place to stop over whilst we were discussing my trip last week and it fitted the bill as being roughly on the way back to Calais and is somewhere I’ve not been before (apart from travelling through on a train!).

After a quick breakfast in the Cologne Station concourse (ham salad baguette and coffee) I got myself packed and on the road (after paying €42 / £30 for bike parking!). Fortunately there wasn’t a repeat of the accident traffic jam I’d experienced on the way to Cologne and I was able to take advantage of the lack of speed limit on the autobahn.

I stopped for petrol in Belgium and read the English instructions on the pump instructing me to pre-pay at the cash desk inside. After waiting in a queue for over five minutes I was told that to pay by card I needed to pay at the pump (if I’d wanted to pay by cash I’d need to have pre-paid at the cash desk)! I was only one of the people caught our – the German lady in front of me was a s confused as I (and subsequently asked me to help her at the pump) as was the English lady I met a few minutes later whilst queueing for a coffee. I don’t want you to think that these small issues spoil my trips, they’re all part of travelling, but they do serve to illustrate the small cultural and societal differences that can trap the unwary. Of course those very differences also bring joy to the traveller and are a large reason for travelling.

Once in France I immediately noticed an increase in the number of bikes on the road – I started to see bikes every few minutes instead of one every hour or so. However my journey in France was a short one – Lille is only a few miles from the Belgian border, so I was soon there. A quick look at the sat-nav showed there was a nearby Novotel so I headed for that and was , once again, able to book a room at my first attempt. It’s slightly more expensive than the Ibis in Cologne (but a lot cheaper if you factor in the parking charges as I can park my bike for free here) and so much more refined and comfortable. By now I should know the differences between the hotel chains but I never stop to think before booking. Maybe one day I’ll learn my lesson!

After checking in I headed for the main square and sat down outside a bar with a nice cold beer and people watched for a while in the warm sunshine. In one corner of the square a troop of four young men went through a break dancing routine to entertain the crowds. Break dancing not being my ‘thing’ I quickly moved on. Feeling refreshed and rested I went for a wander around the town to get a ‘feel’ of the place. Lille is a typically ‘French’ town with wide boulevards, cobbled back streets and plenty of open spaces. Being Easter Sunday the main square was busy but the back streets were quiet. In another small square I came across a book festival where there was a lively market dedicated to second hand books. Not much use to me as my French isn’t good enough to allow me to read a book in the language!

Whilst walking around I’d been keeping an eye out for a suitable restaurant to have dinner in later in the day. I saw a couple of likely looking candidates but that didn’t stop me looking online back at the hotel. There I found an online article from the Telegraph (http://www.telegraph.co.uk/travel/destinations/europe/france/north/738817/Eurostar-one-day-in-Lille.html) entitled “Eurostar: one day in Lille” which recommended visiting the Rue de Gand which houses many restaurants so I headed there in the evening. The article was correct – there were a lot of restaurants. The first two I chose were full but I was lucky on my third attempt. Instants Gourmands (http://www.instantsgourmands-connivence.com/instants,gourmands.php) didn’t look that appealing at first but turned out to be rather good. It’s a small restaurant with a single, hard working waiter and a good atmosphere. I chose to start with escargot which came served in a garlicky cheese sauce, a nice change from the usual garlic butter. For a main I had ‘St Jaques flambe au Pastis avec risotto’. It was an excellent choice. The risotto creamy and flavoured with the Pastis and the scallops cooked to perfection. For dessert I had a cheeseboard which had a smoked cheese, a goats cheese and a brie. All were excellent. 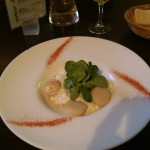 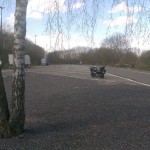 On the way to Lille 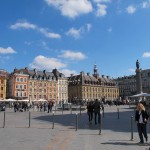 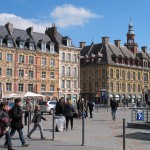 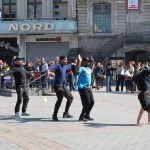 Break dancing in the street 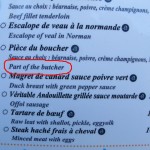 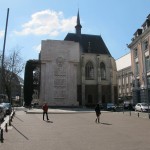 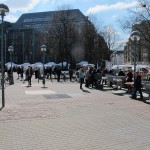 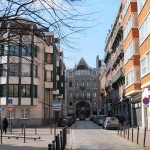 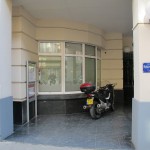 The bike having a reast at the hotel 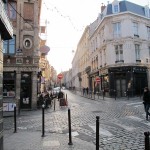 Back streets of Lille 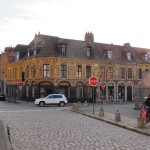