I’ve come to Chimay in Belgium to see my friend Debbie Barron (http://www.teamoscarracing.co.uk/ ) race at the Chimay Road Circuit (http://www.circuit.be/en/ ).

Last night I stayed with a friend who lives near the Cannel Tunnel entrance and had quite a journey to get there as Kent Police have put in place Operation Stack ( http://www.bbc.com/news/uk-england-33637756 : https://en.wikipedia.org/wiki/Operation_Stack ). I’m glad I was on the bike otherwise I’d probably have been aboiut another hour. Once there I was great to catch up with my friend.

With only a few miles to do this morning it didn’t take me long to get to the terminal but then I hit more traffic jams. According to Eurotunnel delays of up to 2.5 hours were expected because of ‘intense migrant activity in the French terminal’. Again the bike saved the day and I only had a dealy of just over an hour because they can fit bikes on easily. Whilst on the train I met a chap on a GS1150 who was headed for Avignon and expecting to be warm when he got there!

I stuck to the motorways down through France and into Belgium before takinng to the ‘A’ roads for the last 50 miles to Chimay. Once near Chimay I realised I was riding on the circuit (Chimay is a road circuit that uses normal public roads that are closed to the public when racing is on). Chimay is also famous for its Trappist beers and I have to confess to sampling some of them this evening. They are truly delighful but VERY strong!

I have a paddock pass so will be camping in the paddock for most of the meeting but its not valid until tomorrow so decided to stop in a hotel for tonight as I can’t be bothered to put up a tent for one night then take it doen to move it 5 miles tomorrow. I tried a couple of places in Chimay but they were full (not surprising with races on!) so tried a little further out and found the Hotel De Franc Bois in the village of Lompret about 5 miles outside Chimay. As I pulled up the proprietor came out and offered me a room. Whilst showing me around he asked if I would like to put my bike in his garage and when I did I saw his BMW 1200GS complete with Isle of Man stickers. I found out he’d been over to the Island 3 weeks ago for the Southern 100 races. The same races I’d been to the Island for 3 weeks ago! Not only that when I mentioned I was here to see a sidecar rider he mentioned that he knew a lady sidecar rider from the Isle of Man – Debbie Barron!

Once I’d settled in I took a walk through the (very) small village to the local restaurant and had snails for a starter followed by steak in a cream and Roquefort sauce. I couldn’t finish all of the chips and declined a dessert. The village appears to have a local metal sculptress as there are metal sculptures dotted around the village all attributed to ‘Hilda Bogaert’.

I’ve just heard from Debbie and will be moving down to the paddock tomorrow. I’ve no idea whether there’s WiFi so don’t know if I’ll be able to post. If I can’t I’ll write the blog and upload it when I get home. 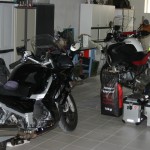 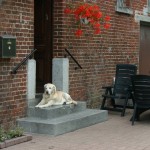 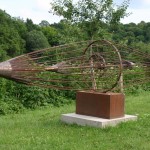 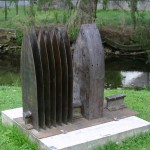 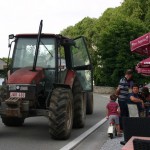 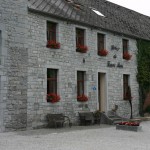 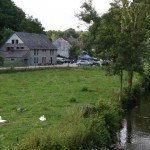 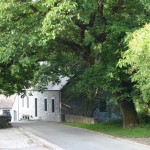 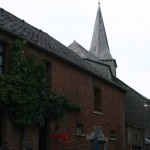