Welcome to TT 2013. Due to the nature of the TT I’m not going to promise regular blog updates, but will blog when I can!

I’ve been here since Saturday evening (It’s now Tuesday) and not only has it been the usual TT whirlwind since I got here, the week before departure was also a whirlwind. The day before departure was my last day at work and I was out every evening except Tuesday and Wednesday, so it was fun trying to get everything organised in time. As I needed to be off at 6.30 am the following day I made sure I was back very early on Friday evening for the final packing and an early night.

The trip from home to Heysham was as boring as ever and the crossing was as flat as a millpond. I upgraded my seat and had a seat overlooking the bow,which was nice, but the big expanse of glass acted like a greenhouse so I cooked for most of the journey, which wasn’t so nice.

After landing I went straight up to the Grandstand to sign on for marshalling. As I parked my bike in Nobles Park a passer by asked if I knew the way to back of the Grandstand, as I was going there I offered to show her the way and got chatting. I found it ironic to find out that she was a local and I, having only landed 10 minutes before from Hampshire, was the one showing her the way! Forty five minutes after landing I was at my marshalling point with my bib on. I guess I wasn’t really needed as there were plenty of bodies around, but I like to show willing! A quick pint in the Railway afterwards and then back to Port Erin to unpack and get settled in before a well earned sleep.

I had a bit of a lie in and a slow start on Sunday. I had to go into Douglas for about 12 to get my Manx SIM card cut down to fit my iPhone as the cheap n cheerful Nokia it was in may have been cheap but it didn’t make me cheerful, it infuriated me! With the SIM cut down and in my iPhone I can make cheap(ish) calls and access the internet via the phone network as well as via wi-fi. After getting the ‘phone sorted I went to the campsite to meet up with Steve and Sue who then followed me back to Pauline’s for an afternoon and evening of socialising. On arrival Steve put his bike on the side stand, only to watch it topple off the side stand a minute later! The bike narrowly missed me, and would have hit me if I hadn’t moved a few seconds before it toppled. The damage amounted to a broken wing mirror and indicator and a few scratches.  After this minor disaster much socialising (including a trip out for a meal at a local Hotel) was done before we retired at midnight. Steve however did continue in the style in which he started by knocking over a glass of beer shortly after picking his bike up!

Monday was Bank Holiday and we woke to pouring rain and high winds. Steve and Sue had an unpleasant journey back because of the weather and because of no offside wing mirror. I was convinced that practice wouldn’t start because of the weather, but kept hoping. In the meantime I repaired Pauline’s bannister and also a minor glitch with her computer.

Practice did go ahead as the weather had cleared up by the time practice was due to start. There was a short delay whilst a broken down bus was moved off the course and then an untimed practice got under-way. Sadly the practice was abandoned early due to a fatality following an incident on a very fast section of the course. Yoshinari Matsushita lost his life participating in the sport he loved. and I, along with all the other marshals, am extremely saddened by the news.

Tuesday is a normal working day in the Isle of Man and Pauline got off to work early. I, on the other hand, had  a lie in and after getting up spent time chatting on the net and ‘pottering’ before heading off for the Grandstand where I had a walk around the paddock and took a few pictures before going to the ‘Home of Rest for Old Horses’, a visit I try to make every year whilst I’m here.

I’ll shortly be off out again to marshal in Union Mills for this evenings practice session. 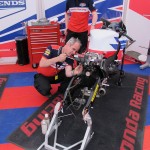 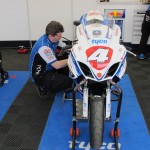 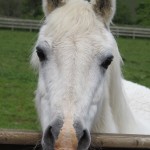 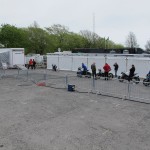 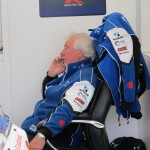 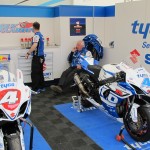 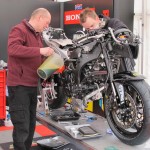 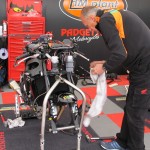 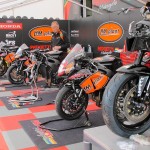 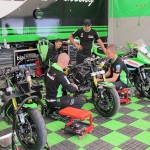 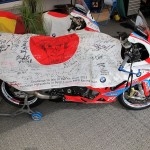 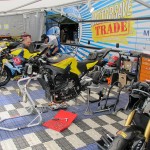 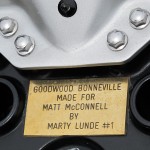 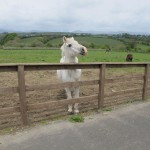 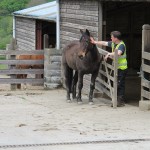 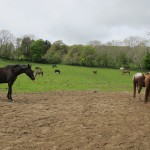 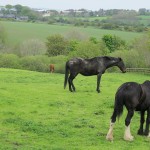 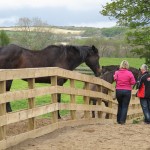