Chris is a computing contractor who enjoys travelling and motorcycles. He sometimes manages to combine these two passions and has ridden  motorcycles in countries across the globe. He graduated in Computing as a mature student in 2000 and is now 57 years old. He is widower,  though  his wife, Simone, was alive when  the trips were made and whilst ‘Two Trips’ was being written. He has one adult son, Adam, his  companion on both  trips. His interests include photography, cooking, the countryside and he marshals at the Isle of Man TT and MGP races. As  well as writing this book  he has also written for a variety of magazines, mostly on motorcycle related subjects. 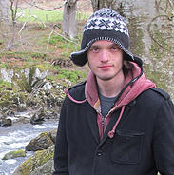 Although qualified in Countryside Management Adam currently works as a chef which he enjoys immensely. The trips seem to have given Adam  the  wanderlust as since visiting California he has travelled extensively around Europe, toured the southern part of South Africa and undertaken  voluntary  work in rural India. He is currently planning a return trip to India to visit the friends he made whilst doing voluntary work. The strong  political stance  and love of the countryside displayed in the book are still with him.

Links to My Other Websites